What’s the difference between Arabica and Robusta, and which is better for your brew? It’s time for a bean-off.

Have you heard the expression ‘separate the wheat from the chaff’? We like to think of coffee bean species in the same way. It’s about separating the sweet, smooth textured Arabica beans from their bitter Robusta cousin. Now, we’re not saying Robusta is a dirty word – some people prefer its woody notes – but we always recommend Arabica for a sweet, dependable cup that gives you all you want from a really good coffee.

What are Arabica and Robusta?

Coffee beans grow inside coffee cherries on evergreen flowering plants called Coffea. There are around 120 different species of Coffea tree, but we coffee lovers prefer to zero in on two: Arabica and Robusta. You’ll probably have an idea which one is best. Have you ever seen ‘100% Robusta beans’ plastered loud and clear on the front of a coffee packet? No? We guessed not. As we’ve said before, Robusta coffee isn’t great; it has a burnt-rubber flavour and is mainly used in low-grade instant coffee.

Shimmy over to a bag of Arabica and you’ll find another story. Here, it’s all about premium beans bursting with beautiful flavour. There are exceptions, of course, but if you choose top grade speciality beans from a good roaster (hello ?), you know you’re getting the best Arabica beans for your brew.

Arabica coffee was the first type of coffee to be drunk. It has its origins in Ethiopia, which still only grows Arabica to this day. Arabica plants are mainly grown in East Africa and Central and South America, with Brazil harvesting the most Arabica coffee each year. It is a little trickier to harvest as it requires higher altitudes than Robusta, but these high altitudes help slow the growth rate and produce coffee with✨disco balls✨of flavour! It’s no surprise, then, that almost all speciality coffees are Arabica. With its intricate flavour notes and natural sweetness, premium Arabica coffee (because there are also some not-so-premium Arabicas on the market…) is what you really want to brew!

Considerably less Robusta is grown because, well, less people want to drink it. Around 30 per cent of coffee harvested is Robusta, compared to the 70 per cent for Arabica. It was first discovered in the late 19th century and isn’t called Robusta at all – Canephora is its proper name.

Robusta plants are (surprise surprise) more robust. Easier to grow and resistant to many diseases, they take fewer farmers and less time to harvest. The trees are pretty huge, too, and produce very large yields. This makes Robusta much cheaper to buy.

You can sense a ‘but’ coming, can’t you? And here it is… Robusta is cheap BUT tastes pretty poor.  It’s widely regarded as the lower-quality end of coffee. Compared to all those sparkling flavour nuances in Arabica beans, Robusta tastes nutty, burnt and bitter. Its overbearing earthy flavour and heavy mouthfeel are just right for, errr, turning into dehydrated brown granules of instant coffee. Which is what it’s mainly used for.

Chemistry of coffee: time to don the mad scientist look!

Let’s dive into the science behind the sip and find out why these beans taste the way they do. We’ve just told you that Robusta tastes more bitter, but why is this? Well, it’s all down to the caffeine content. Recall your last bleary eyed morning, and you’re probably thinking ‘CAFFEINE: GIVE ME MORE’. But hold up. Too much caffeine in a bean gives you, well, Robusta. These coffees taste bitter because of their high caffeine content: 1.7–4% compared to the 0.8–1.4% in Arabica.

Arabica coffee also contains more oils (15-17%) and natural sugars (6-9%) than Robusta, which is the not-so-secret secret behind the complex flavour layers in your Arabica brew. Fruit, chocolate, nuts: it’s like the best sort of selection box!

What are coffee varietals?

Good question. We always list the main varietals in our coffees, but what are we actually talking about? A varietal is simply a subspecies of Arabica or Robusta. It’s the same with any species; you have apples, but you also have Granny Smith, Gala, Hidden Rose (take a look – they’re pink inside!). Bourbon, Castillo, Caturra, Catual, SL28 and SL34 are some of the most common Arabica varietals, and each has a slightly different flavour. The location of the coffee farm plays a part, too. A Bourbon grown in Rwanda will taste slightly different from a Bourbon grown in, say, Brazil. Just another reason why there’s always something else to try in the merry world of coffee! 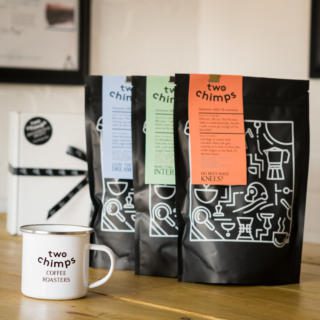 This isn’t just coffee. This is top-scoring Arabica Two Chimps Coffee… Let’s get some just for you!