Enjoy a lovely milk-swirled coffee, minus the dairy!

Tesco’s dairy-free fridge is like a plant-based pick ‘n’ mix. Whether you’re vegan or not, there are milk alternatives of every sort, from our staple soya to newer recruits like coconut and cashew.

What does this mean for our beloved coffee? A lot! Now it can enjoy a wardrobe change every day! From tropical-tasting coconut coffee to could-be-cow’s-milk soya lattes, there are near-endless combos to sample.

Choice, while exciting, can be a little daunting. I mean, you don’t want to end up with a milky mess, do you?

No fear. We’ve put together a one-stop guide to the best vegan milks for your coffee to ensure nothing but plant-based perfection makes it to your cup.

Wondering why we add milk to coffee? Wonder no longer – we’ve got a guide for that, too!

Almond milk is fairly high in protein, so is a good choice for latte art. It can separate, though, so watch out for a watery layer beneath your masterpiece. Like most dairy-free milks, almond milk curdles when poured directly into hot coffee. You can steer clear of lumpy cups by warming the milk before popping it in with your coffee. 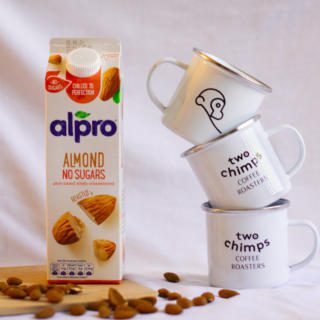 Soya milk was the first main dairy-free alternative and is still a favourite. It has a mild taste, unlike almond, and therefore works well with most types of coffee. Soya is super for froth, too, because it sports a high protein content. Take a sip of its smooth, creamy texture, and you might just think you’ve found dairy’s doppelgänger.

Like almond, soya milk needs to be heated before you add it to your coffee. But please do watch out; soya milk can coagulate if overheated and very quickly start rockin’ the cottage cheese look…

Take your brew to The Bahamas with a splash of coconut milk – oh la la!

Coconut milk consists of water, coconut and rice, usually with vitamins and (vegan) stabilisers added.  This isn’t the type of coconut milk you add to your Thai curry; you’ve got the wrong sort if you’re reaching for the can opener! Coconut milk (the milky sort) has a sweet, floral flavour that rarely requires additional sugar. You will get some coconutty flavour in your coffee, but it could be the answer if you are feeling tropical!

For this type of milk, oats are ground and blended with water and a splash of oil (for emulsification). Oat milk is a popular choice thanks to its natural sweetness, creamy texture and barely-there oatiness. Your gut will thank you, too: oat milk contains twice the amount of fibre as cow’s milk.

Oat is sounding A-OK. And guess what – two more oaty benefits coming your way! Oat milk is good for steaming and doesn’t need to be warmed before being added to coffee – it’s the only milk alternative you can pour straight in! What’s more, oat milk is widely considered to be one of the most eco-friendly milk alternatives as it requires less water than options like almond.

Good for those looking to avoid dairy and nuts, but not so good for your coffee. We can’t really prettify this one. You can’t steam rice milk because it has a very low protein content and its watery texture will leave your cup… lacking. The sweet-toothed amongst us might like the taste of rice milk but watch out – its sweetness often comes from added sugar and rice syrups.

This milk alternative is less widely available than some of its cousins. It can be a little costly, too.

Nevertheless, cashew milk is a top choice if you fancy a nut-based milk that’s not overwhelmingly ‘nutty’. Unlike almond milk, which wears its almond-ness with a capital A, cashew milk gives you just a whisper of its original form. It is also creamier than almond milk, so is ideal for those of us who like a richer cup.

Once again, avoid curdling by warming your cashew milk first. And don’t be alarmed if your latte starts to resemble a bubble bath. Just like oat and coconut milk, cashew milk produces big, frothy bubbles that look and taste a bit different from cow’s milk.

Wear your milk moustache with pride this Plant Milk Day and let us know – what is the best dairy-free milk in your coffee? ?