Take a road trip without leaving your screen and learn about coffee in different cultures. 🧳

Coffee around the world

The big coffee chain giants might be available in every corner of the globe, but traditional coffee cultures are still going strong. Whether you’re in a Turkish bazaar or the Caffè Florian in Venice (the oldest coffee house in the world), you’ll still find coffee drinking quirks that have been passed down through generations. So, how do our fellow coffee fans drink their java? Pack a suitcase and grab your passport, because we’re going to find out!

The Turkish word for ‘breakfast’, kahvaltı, might translate to ‘before the coffee’, but Turks rarely have a brew with their breakkie. Most coffee in Istanbul and elsewhere is drunk in the afternoon or at night, usually as the close of a good meal or precursor to late-night conversations.

Turks take their coffee dark, strong and served with sugar. The sugar is added to the cezve (traditional copper coffee pot in Turkey) beforehand, and the finished drink is served with water to cleanse the palate. They’ll most likely be a piece of lokum (Turkish delight) on offer, too.

Fancy knowing what the year ahead holds? Turn your coffee cup upside down when you’ve finished sipping to find out! Turkish coffee is drunk unfiltered, leaving gritty grounds which make shapes when left to dribble out. 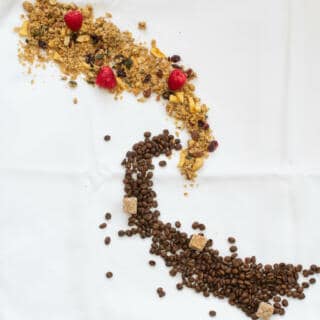 Italy: no cappuccinos in the afternoon!

No coffee road trip would be complete without a stop off in Italy, would it? It’s the birthplace of the espresso; the caffè-scented land with days that revolve around caffeine. Milky coffee is enjoyed at breakfast, followed by one (or more) caffè macchiatos mid-afternoon. Punchy espressos come after dinner and are typically enjoyed with friends at the local coffee bar. Most Italians drink their coffee standing up at the bar (al banco) because it’s cheaper than ordering to your table. We’re not sure they’ll like our Pull Up a Chair coffee, then…

Regional variations mean there is always something new to sample. Take a trip to Turin for a velvety bicerin, a beautiful coffee with visible layers of coffee, chocolate and cream. If you’re in the south, stop off in Sicily and order a caffè d’un parrinu with flavours of star anise, cinnamon and cloves.

Coffee first arrived in Japan in the 17th century when Dutch nationals drank it in Nagasaki. The Japanese weren’t left star-struck; the bitter taste of Dutch brews wasn’t for them.

Coffee became more popular after WWII, when the Japanese ban on coffee was lifted. Coffee very quickly became cheaper, more accessible and much more convenient. Ease is what it’s all about with Japanese coffee – did you know that it was a Japanese coffee company that invented the first ready-to-drink canned coffee in 1960? Today, instant coffee, chain stores and coffee vending machines are big business. Most people take their coffee on the move, and you can find hot and cold coffee drinks sold on almost every high street. Indie coffee shops are becoming more popular, however, as the Japanese embrace third wave coffee culture.

Cold coffee originated in Japan and is still a hot topic there today. Japanese-style iced coffee is brewed hot and flash chilled using a pour-over coffee device. Cold brew has recently become huge news in North America and the UK. The pros expect its market size to reach $1.63 billion by 2025. Cold brews all round then!

Brewing coffee at home shot up during lockdown. Online sales of coffee and coffee brewing equipment skyrocketed in 2020, allowing all you awesome coffee lovers to make barista-standard brews from the comfort of your kitchen.

Fancy joining in on the fun? Become a Two Chimps subscriber and enjoy speciality coffee delivered straight to your door!

Sign up to our fortnightly email newsletter and be first to know about new coffees, the latest blogs, brew guides, recipes and news from Two Chimps HQ.

JOIN THE TROOP AND WE WILL PLANT YOU A TREE
Your information is stored securely and never passed to third parties. For more information, see our privacy policy.
SIGN ME UP!
Copyright Two Chimps 2021 ‐ Web design by Herdl