Your love of coffee doesn’t go away at noon, although your ability to tolerate caffeine might. But, hey, no problem – decaf coffee is all the range!

Take decaf out from the sidelines

Poor decaf coffee. It’s all too often the butt of a bad joke. And, fair point; some decaf coffees aren’t much cop. Take a sip of supermarket decaf, and you might wonder why you did. Low-quality decaffeination can zap out your beans’ pizzazz, leaving lacklustre coffee that’s just a shadow of its caffeine cousin.

But, hold up, take a look at speciality, ethical decaf coffee, and you’ll find another story. This is decaf coffee taken seriously. This is decaf with a backbone. Here at Two Chimps Coffee, we only source the best decaf coffee beans to sit alongside our regular coffees. Our decaf beans are decaffeinated using high-quality processes to ensure that every last smidgen of coffee flavour remains intact. No one puts decaf in the corner – let’s find out why!

Decaf coffee: what is this stuff?

Plot twist: decaf coffee isn’t coffee without any caffeine. Almost, but not quite. In the US, decaf coffee must have 97 per cent of its caffeine removed, while in the EU this figure is slightly higher at 99.9 per cent.

Decaf coffee fans drink coffee for flavour and flavour alone. It’s the way to go if you want a lush cup but aren’t fancying the pick-me-up kick of caffeine. Decaffeinated coffee doesn’t come from a different sort of bean (not yet, anyway – but who knows?). Instead, it is decaffeinated after being picked and before making its way to the roaster.

Decaf has been kept to the low-grade instant stuff for way too long. Now, as coffee fans look for better chilled-out coffee options, decaf coffee is becoming more popular. So much so that decaf sales increased by 20 per cent between 2017 and 2019. But there’s decaf, then there’s decaf. Decaf bursting with flavour and perfect for every time of day. Yep, that sounds like speciality decaf!

A short introduction to caffeine-free coffee

But, yes, caffeine. Friedlieb Ferdinand Runge discovered this naturally occurring compound in 19th-century Germany. He impressed the poet Goethe when he experimented with atropine, a chemical found in plants such as nightshade. Goethe had a bag of coffee beans on him (good old Goethe) and wondered whether Runge could work some magic on them, too. One year later, and Runge had discovered caffeine.

Fast forward a hundred years, and we find decaf coffee discovered by accident (just like cornflakes). Ludwig Roselius was the head of a German coffee company called Kaffee HAG. In 1903, one of his coffee shipments got soppy with seawater. Oh, blast it. But wait, what’s happened? The caffeine has been extracted from the coffee. But all the flavour’s are still there. Interesting…

Roselius and his successors explored this natural decaffeination process to find a decaf method that keeps all the flavours intact. Ever since then, decaf drinkers have been on the hunt for the best decaf coffee – something that tastes like the real deal, just minus the caffeine! 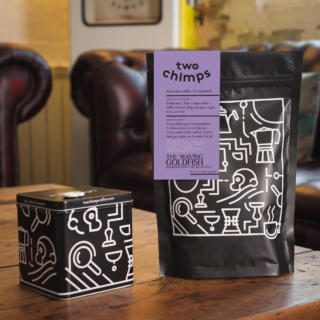 How is coffee decaffeinated? The Sparkling Water process.

Kurt Zosel discovered the Sparkling Water decaffeination method in 1967. This high-quality process preserves all the lovely flavours in the coffee, which is why we regularly source Sparkling Water decaf coffees to feature in our range. Cleaning and moistening are the first stages in the process. The beans expand as they take on moisture, which gives the caffeine molecules more room to move. Next, a natural carbon dioxide solution washes over the beans. The slightly expanded beans have wider pores, which helps the mobile caffeine molecules move from the bean and into the sparkling water solution. This method gets a thumbs-up from us: it produces little waste, is 100% chemical-free, and doesn’t harm the coffee flavour. ?

But you said there are two great methods.

Indeed we did! The Swiss Water process is another top way to decaffeinate coffee beans.It was invented by Coffex in 1979 and is, like the Sparkling Water method, completely chemical-free. Firstly, the decaffeination station (that’s got a nice ring to it) bring the coffee up to the right moisture level before washing it in a specially made Green Coffee Extract. This takes somewhere between eight and ten hours and continues until the caffeine molecules have moved from the coffee into the extract. The extract is processed so it can be reused (waste not, want not) and the decaffeinated coffee beans are then dried and delivered to roasteries like ours.

How else can coffee be decaffeinated?

The Sparkling Water and Swiss Water methods are top of the list for getting the best decaf coffee. There are, however, two other chemical-based processes that use either methylene chloride or ethyl acetate. The indirect-solvent process sees the green coffee beans soaked in hot water before washing them in a chemical solution. It’s the hot water that’s the problem here: it also extracts some of the natural coffee oils and flavour. The beans are returned to the chemical solvent at the end of the process, but even so, not all of the coffee flavour is restored.

With the direct-solvent process, meanwhile, the beans are steamed for about 30 minutes before being washed in the chemical solvent. After washing, they are steamed again to remove any lingering solvent traces.

We stick to Sparkling Water and Swiss Water decaf coffees at the roastery because we know they give a better brew. Flavour loss: that certainly gets the thumbs-down…

Decaffeinated coffee is a bit more complex to roast. This is because the beans are a touch more brittle, as we’ve already exposed them to some treatment. This isn’t a problem – it just means you need a skilled roaster up to the job!

Cuuue… Andy! At the roastery, Andy takes care not to roast our speciality decaf coffee beans for too long. Over-roasting is a big no-no for decaf coffee as it can cause the delicate beans to break down. Our careful, small-batch roasting means we can monitor every roast to bring the very best decaf coffee to your brew!

Is decaf coffee good for you?

Well, yes, but so is regular coffee. Both regular and decaffeinated coffee are high in antioxidants, low in calories and help to reduce the risk of mortality. Oh, and they both make you feel awesomesauce!

Most decaf drinkers choose a caffeine-free brew to regulate their caffeine intake. Caffeine is fine in moderation, but you probably don’t want to down it by the bucket load. Most people’s limit is around 400mg per day (between three and four mugs of coffee), but we’re all different. Whether you don’t want caffeine keeping you awake or just fancy a new flavour, we’ve got a mouth-lingering ethical decaf coffee for you!

Hey, decaf drinkers – now we’re onto the good stuff! We have two lush decaf coffee options in our Two Chimps range, always sourced with the same love and care as our regular caffeinated coffees. Take a sip of The Waving Goldfish, our medium/dark decaf from northern Peru. You’ll find oat crumble and baked fruit notes, with a dazzle of lemon to cut through the sweetness.

Or, why not try How many llamas did you say were in the phonebox? This Ethiopian coffee is decaffeinated by the Sparkling Water process. It’s light, sweet and tastes a bit like summer peaches! Just right for your filter or cafetiere.