Treat the family to an indulgent after-dinner treat with this iconic Irish coffee.

With just four ingredients, Irish coffee is the best and tastiest way to see your evening out in style.

Rich, sweet and ever so slightly swanky, it’s perfect for when you fancy a treat but don’t want dessert. The softly whipped cream collar can take a bit of perfecting, so why not master it now ready for when dinner parties are a thing again? Your friend learnt to crochet during lockdown; you became a cocktail connoisseur. Trust us, you’ll be popular.

Where did the Irish coffee come from? Ireland, yes (no extra points for guessing that), but with a strong American influence as well. It was created in the 1940s by a chap called Joe Sheridan, who worked as a chef near Limerick. The restaurant where Joe worked was close to an airport which became a stop-off point for some rather sophisticated clientele travelling from the US to Europe.

The rainy Irish weather was a shock to the system of these American A-Listers. So, in an attempt to warm up their shivering fingers, Joe created the Irish coffee. To Americans not used to British tea, the strong coffee was a nice taste of home, and the whiskey and cream were welcomed because, well, they’re whiskey and cream.

An American travel writer reported about Joe’s cosy-yet-cool cocktail when he returned to the US but couldn’t recreate it no matter how hard he tried. It was so irresistibly good that he and a friend employed Joe in the US so their fellow Americans could enjoy the Irish cocktail time and again. Well, isn’t that grand!

Measure out all your ingredients.

Use some boiling water to heat up your glass.

Place the brown sugar in the glass.

Add the whiskey and brewed coffee.

Mix well until the sugar has dissolved.

Whip the cream loosely. Be really careful not to over-whip. Remember, you still need to be able to pour it.

Turn your spoon upside-down and place the tip to the edge of the glass so it’s just above the coffee.

Slowly pour the cream over the spoon so it settles on the coffee. It helps if your coffee is nice and hot and your cream is fridge-cold.

Sprinkle with a little nutmeg or chocolate and enjoy! 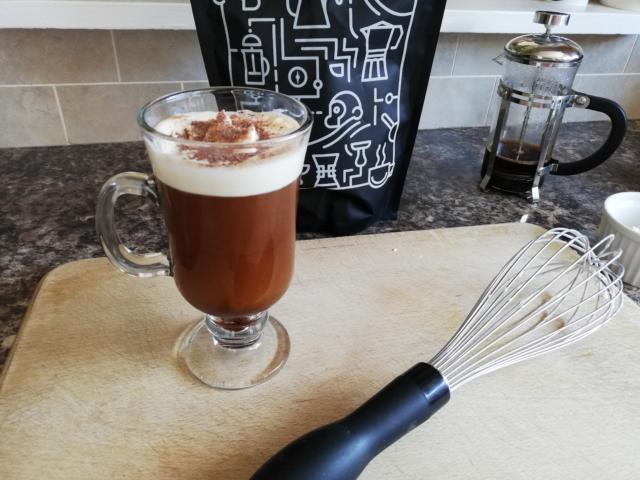 Now you know how to make Irish Coffee, let us know how it turned out! Did you manage the iconic coffee top? Let us know using #twochimpscoffee!

Looking for a great coffee to take your creation up a notch? No problem! Head over to our online shop for some serious coffee goodness.

We roast fresh coffee multiple times a week and always deliver free of change, because we’re nice like that! ☕