Sugar in coffee is one of those pineapple-on-pizza issues – some people swear by it, others won’t hear of it.

Here at Two Chimps, we believe you should enjoy your coffee just how you like – whether that’s with lashings of milk or a more-than liberal sprinkle of sugar.

When we are in the mood for something sweet, a mocha or sugar-sweetened coffee does just nicely. A spoonful of sugar (it helps the medicine go down, you know) is the obvious choice for sweeter coffee, but what about honey? Natural, great-tasting and buzzing with nutrients, honey is an awesome alternative to white sugar. Honey and coffee: it was always meant to bee.

Different cultures have used honey for years – and we mean years. Honey is the world’s oldest sweetener and was first used, historians think, by beekeepers in Ancient Egypt. In the 1100s, honey really came to the fore, with Europeans consuming around 4.5 pounds of honey every year! From cooking to beauty, medicine to currency, our ancestors couldn’t get enough of our favourite sticky syrup.

Is your honey usage a bit less creative? Limited to topping toast and maybe the odd blob on porridge? We guess you’ll get some funny looks if you start using it to pay at Tesco, so why not branch out in other ways – with coffee! Tea-drinkers frequently use honey to sweeten their daily brew, so it makes sense to try it in coffee too!

But I like honey on toast – why do I want to put it in my coffee?

Adding sugar to coffee is fine – it does the job, after all – but can cause problems if you’re trying to reduce your intake of the white stuff. Honey is a great alternative to sugar or artificial sweeteners as it comes with a bucket load of health benefits along with its syrupy sweetness.

First off, honey is a top source of antioxidants (the good guys that help prevent cells from damage). Coffee is high in them too, so put honey and coffee together and you’ve got an antioxidant powerhouse. What else? Honey contains lots of vitamins and minerals like calcium, magnesium and B vitamins which do great stuff for your overall health. White sugar is just sweetness ‘n’ calories, but you get lots of extra benefits with honey. It’s also easier to burn honey because your body digests its sugars more quickly. Regular sugar, on the other hand, needs to be ingested before your body can break it down.

Honey isn’t entirely golden (well, it is, but you know what we mean). Like sugar, it contains calories, but honey’s intense sweetness means that you will need less honey than sugar to make your coffee scrummy and sweet.

You’re on the honey

Wondering which honey to put in your coffee? Honey is very similar to coffee in that there are lots of different varieties, each with their own distinct flavour profiles. Sugar is a sweetener that tastes, well, sweet, while every honey tastes and smells a bit different. Its flavours alter depending on the region where it was produced – again, very similar to coffee!

Some honeys will pair with coffee; some won’t. There are over 300 different types of honey but don’t worry, you’ve not got to trawl through every one – we’ve got a few safe bets to get you started!

The first question to ask is: do I want regular or raw honey? Raw honey comes directly from the hive and contains more nutritional benefits, although regular is the type you’ll find most readily available in the shops. We used regular honey as it’s much more accessible.

Next up is flavour. Strong-tasting honeys aren’t great for coffee because the flavours will compete with, rather than enhance, one another. This makes subtle honeys the way to go. How do you know if a honey is light and delicate? Look at its colour. Light, pale golden honeys are mild in flavour, while darker, more treacle-like ones will have more strength. You’ve probably heard of Acacia honey before – this is a good match for coffee because it is sweet and subtle and ever so slightly floral. Clover honey is another good choice and is very popular in the US. Honeys such as Buckwheat (packs a punch and is better in beer) and Blue Gum (nice on toast but not in coffee) are more distinctive and will overpower the lovely flavour of your coffee.

Fancy a sweeter coffee? Let’s try one with honey!

Have we tempted your sweet tooth? Try our honey cold brew for the ultimate coffee cooler 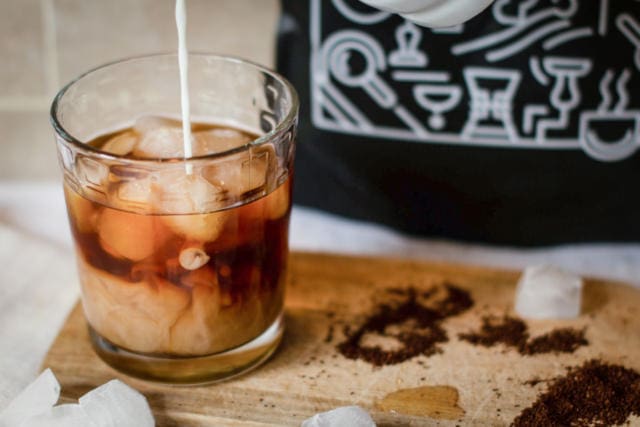 Sweet tooth? Try these too:

View our lovely range of coffees in our online coffee shop – they’re all speciality, hand-roasted and off-the-press fresh!