Join the troop and we'll plant a tree with Ecologi.

What gives you more energy: coffee or energy drinks?

Is there a difference between coffee and energy drinks? Which should you drink to banish those bleary eyes…?

We all know what caffeine does, but do you know what it is?

Caffeine is a naturally-occurring stimulant found in around 60 plant species. This gang of caffeine-headed greenery use caffeine as a pest repellent, while we humans mainly reap its psychoactive benefits. Consuming caffeine in the forms of tea, coffee, chocolate and energy drinks stimulates our brains and makes us feel more alert. This is all down to its nifty ability to subdue the adenosine molecules in our bodies. These are the ones that make us feel sleepy, so you could say that caffeine hits the snooze button on sleep.

It is absolutely fine to consume caffeine in moderation, although you don’t want to be having much more than around 400mg a day. No one’s metabolic rate is the same, which means we all respond to caffeine in different ways. So, 400mg might be good for you, but Joe Bloggs next door might want a little less.

How much caffeine in coffee? Tell me!

It’s pretty tricky for us to measure the exact amount of caffeine in your joe. Why? Because everyone takes their coffee in different ways. Some people leave theirs steeping for longer to get a punchier tasting cup (which will give you a bit more caffeine). Others might take the strength down by using a few fewer grams of coffee when they brew (a little less caffeine coming up).

Stripping it right back, we can tell you that one arabica bean contains 1.9 milligrams of caffeine. This means that our coffee gives you approximately 1.2 – 1.5g of caffeine per 100g of beans. Things change quite a bit when it gets to the brew, as different extraction rates and coffee making methods all affect how much caffeine coffee contains. A mug of filter coffee contains, on average, 140mg of caffeine.

Enjoy a double espresso, meanwhile, and you’ll get a hit of 60-100mg of caffeine. Ooooh, what’s that, espressos don’t contain as much caffeine? That’s right. The little espresso gives you less caffeine than many other types of coffee drink. It’s just uber concentrated and drained in a couple of minutes, meaning that you consume a fair amount of caffeine in one go. It’s what we call a caffeine kick!

Caffeine in energy drinks vs coffee

Energy drinks provide a quick fix for sleepy souls. They are easy and convenient to drink; a fast-track to dynamo energy on those days when you just wanna head to bed.

The amount of caffeine in energy drinks depends on the brand. One 500ml can of Monster Energy contains 160mg of caffeine. And how much caffeine in Monster compared to coffee? Well, down the full can, and it’ll be the same as having four espressos, one after the other. Core, blimey!

And Red Bull compared to coffee? It gives you wings plus an 80mg hit of caffeine – that’s the same as two espressos. 80mg is the average caffeine content for energy drinks, meaning that a cup of coffee does, generally, have more caffeine. 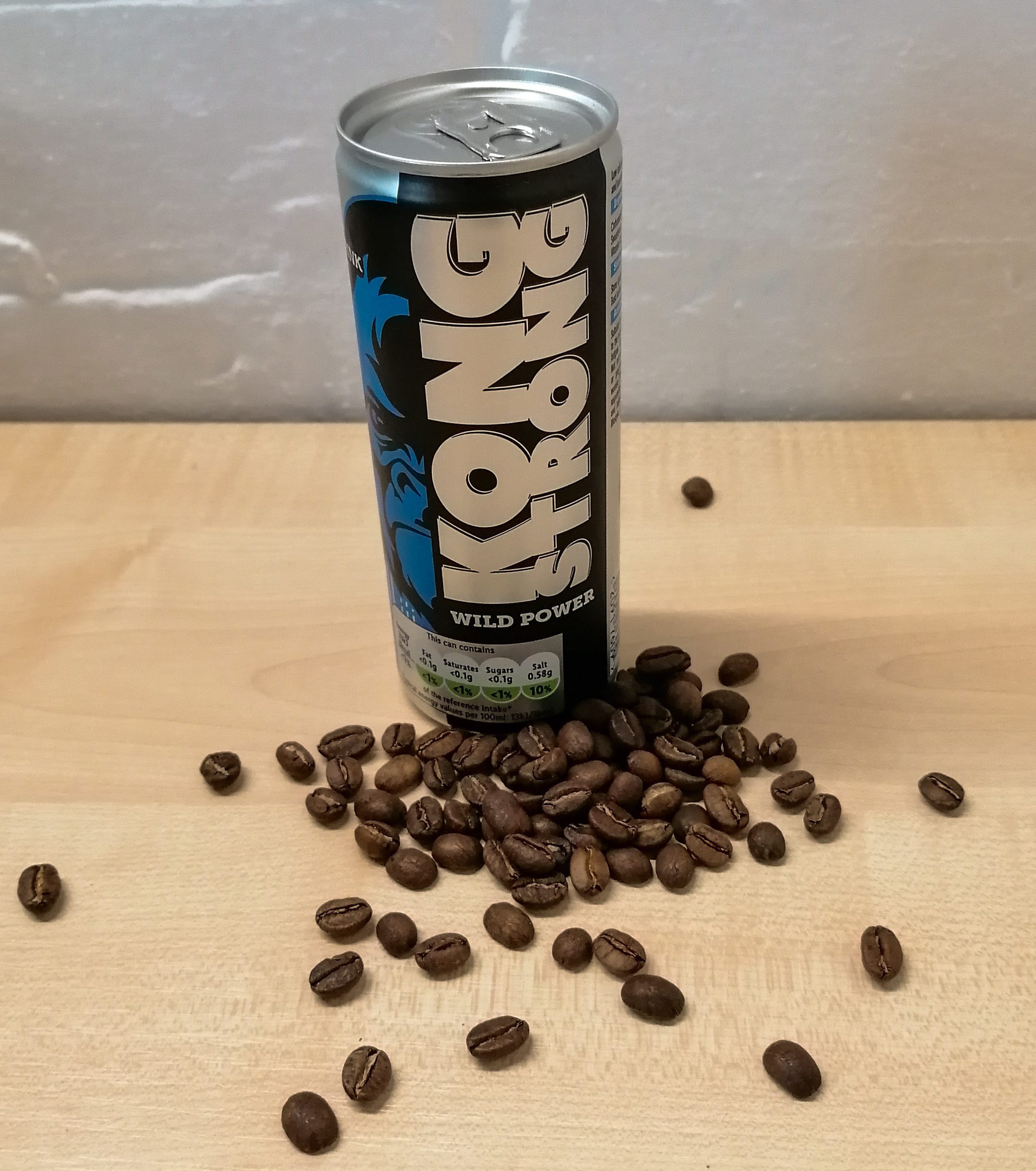 There’s more to it than caffeine

Brain-boosting caffeine might be all you’re interested in on super sleepy days, but there’s a bit more to think about. Take the sugar content in your energy-boosting drinks. We guess you won’t be surprised to hear that most energy drinks are like sweet shops when it comes to sugar – they’re pretty high in the white stuff. Take that can of Monster. It’ll give you a sugar rush with its 55g of added sugar, which is equivalent to 13 teaspoons and well over the daily recommended limit of 30g. Can you sense a sugar crash coming on? The boost from energy drinks is great… until the effects begin to subside and you want to flop back in bed an hour later.

Energy drinks are also high in artificial colours, flavours and preservatives, while coffee is entirely natural. Drunk black or with plant-based milk, it’s also vegan. And then there are all the health benefits associated with coffee. As well as boosting your energy levels, a cup of coffee can help increase your metabolic rate, improve your memory and might lower the risk of diabetes and Alzheimer’s. There are some healthy nutrients in there, too, such as manganese and potassium. Energy drinks give you some goodness, to be fair, (vitamins B6 and B12), but they don’t look so nutritious when we remember that whopping sugar content…

Coffee vs energy drinks. From where we’re standing, coffee knocks it out of the park with its awesome natural flavour and health-boosting benefits. Now, we’re feeling a little tired after all this writing… time for a coffee?

Looking for high energy coffee that’s full on flavour? Head to the Two Chimps shop and check out our full range of speciality coffees! See you there!

How To Grind Coffee Beans Without A Grinder

How to Make Loose Leaf Tea

Beginner’s Guide to V60 Pour Over